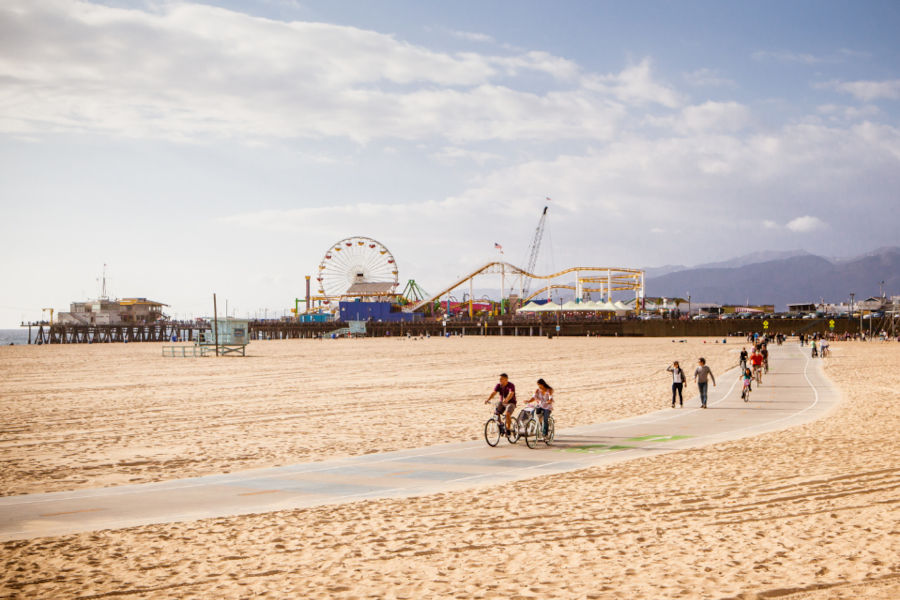 Santa Monica is a terrific place to explore. It is a beachy Southern California city that boasts a pleasant climate year-round. It’s filled with charming shops and restaurants and magnificent beaches.

There are many ways to check out Santa Monica’s attractions, but biking is recommended. You can get to destinations quickly, and you can hop on and off whenever you please. And if you don’t have a bike, there are several bike rentals available throughout the city, such as Boardwalk Bike Rentals.

Before you set off on your trip, you may want to plan out some points of interest to check out. Here are some sites you won’t want to miss out on during your bike rental trip in Santa Monica.

The Malibu Pier is a historic landmark. It was once called the Riviera of America. Its proximity to Surfrider Beach makes it is a popular destination for surfers. The beach is known for its three-point breakers that you can ride for hundreds of yards. And even if you don’t surf, there’s plenty to enjoy at the pier, like terrific seafood restaurants and awe-inspiring scenery.

Also known as Port Los Angeles and the Mile Long Pier when active, the Long Wharf was constructed by the Southern Pacific Railroad Company between 1892 and 1894. It served as a cargo and passenger port until 1913 and was mostly removed by 1920. It was used as a run-down fishing pier until 1933.

Today, the old site of Long Wharf is located at Pacific Palisades and California State Route 1 at Will Rogers State Beach lifeguard headquarters. A Historic Landmark monument plaque and a few feet of track mark the site.

Venice Boardwalk has long been known as a popular street scene. It is defined by the two-mile paved stretch of Ocean Front Walk on Venice Beach. It’s a great place to shop for unique items, check out street performers and local art, and people-watch.

There are also plenty of fun activities to enjoy at the boardwalk, including bike rentals for the bike path, a children’s playground, volleyball, and other athletics courts, a skate park, and the famous Muscle Beach. When you get tired, just laze out on the beach itself.

Manhattan Beach Pier is located at the western end of Manhattan Beach Blvd. in Manhattan Beach. It spans 928 feet long. Although it is not the longest pier in California, it is the oldest concrete pier on the west coast. It has been standing since the 1920s.

The Pier is also quite popular. Its red-roofed roundhouse and turquoise steel railing make it a commonly photographed destination. It also features a variety of shops, volleyball courts, restaurants, and a free aquarium.

The Hermosa Beach Pier is in Hermosa Beach, which is about a half-hour south of Santa Monica. It was originally constructed in 1904, but after the original washed away in 1913, a concrete one was built to replace it.

The current pier extends 1,000 feet. It features small tile pavilions that provide shade for fishing and picnic parties, a bait stand, and an auditorium building that houses various enterprises and public restrooms.

Redondo Beach Pier and King Harbor provide scenic views of the Pacific Ocean. Stroll along the pier or take a boat ride for an exciting outdoor adventure. Other activities to enjoy include shopping, bike rentals, in-line skating, fishing, and live music performances. The area also provides a variety of shops, hotels, and restaurants.

The Palos Verdes Peninsula is a geographic subregion of Los Angeles County. It is known for its scenic ocean and city views, resort-like vibe, and extensive horse trails. It contains a wide variety of parks and recreational areas, including the South Coast Botanic Garden, Point Vicente Park, Del Cerro Park, Ryan Park, and more.

Santa Monica has so much to offer. A bike rental is an eco-friendly way to take it all in and get some great physical activity at the same time. Which of these sites are you most looking forward to checking out? The team at Boardwalk Bike Rentals would love to help you with your bike rental to enjoy these points of interest. They have everything you need to take a bike out on the town and see everything Santa Monica has to offer!